A downloadable game for Windows, macOS, and Linux

Our hero, who does not know it yet, is to save his world from bizarre beings that appeared long ago in strange metallic boxes.

You will initially find yourself crashing down into a deep forgotten cave system, once the meeting place for seers. Hearing voices, all you want to do is get out of this place.

Run, jump, grab ledges to make your way through the maze of passageways, while having someone in your head, annoyingly give you advice.

You will be paying for early access to early game builds, so the price you pay now is a discounted price for the full game. If you buy into early access now, you will be helping fund the development of the game as well as being able to follow the game development as the game grows. PLEASE ONLY PAY IF YOU WANT TO SUPPORT THE GAME, AS EARLY BUILDS WILL BE LACKING CONTENT/GAMEPLAY.

Eaper is an ancient world on the outer rim of its galaxy, vast and -- until relatively recently -- mostly peaceful. There are ruins of an even more ancient civilization scattered across its surface, with strange inscriptions that can’t be deciphered by anyone in living memory and skeletons of monstrous creatures that no longer walk the planet’s surface.

The Insectoids themselves are made up of several different races, with the Insectoids/Scarabai being the most advanced. ‘Insectoid’ is the technical term for their race, while ‘Scarabai’ has an older, more religious tone to it that has mostly been abandoned by all but the seers. These seers wait for a savior that will seemingly never arrive: a youngling to come and rise up against their masters, someone who will allow the scales to fall from their eyes. Meanwhile, many of the Scarabai are blinded by the technology of their oppressors, unable to properly see what is being done to them, or that they could even resist or fight back. When the seers try to convince their fellow Scarabai that something is wrong, they are shrugged off or denied.

The Scarabai, even though they are the dominant group among their own kind, are essentially helpless against the Corporation. They do use weapons -- swords and bows -- but rarely, if ever, use them against those who rule them. As time has passed they have mostly abandoned their naturalistic religions, but the seers still retain them. The Hero lives in a hive informally known as the Harvesters, due to the work they do for the Corporation: hunting and gathering resources. 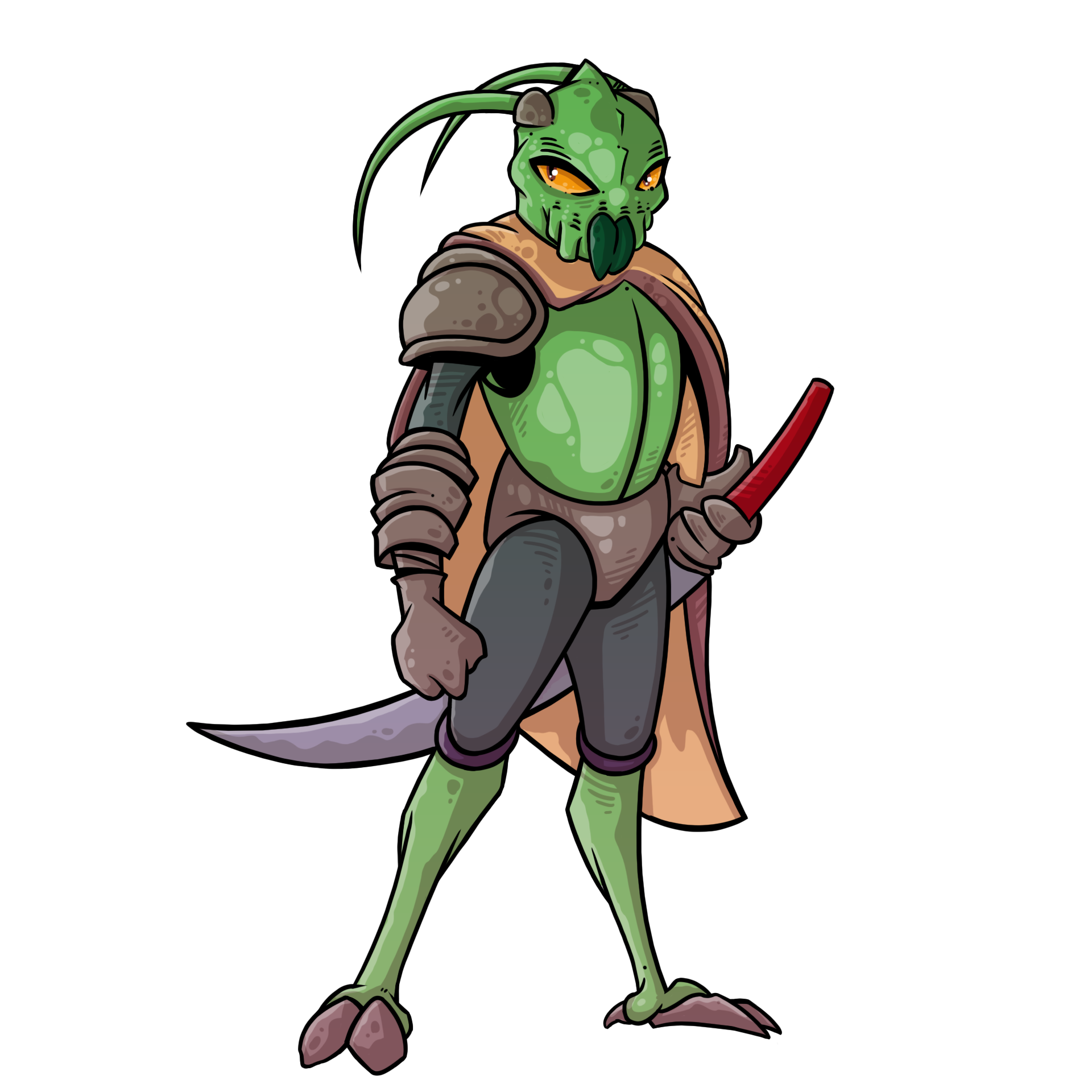 The Corporation is, at the current time, a kind of master race on Eaper: a breed of humanoids from another planet that has committed genocide and enslaved those remaining. At this point, not even they remember the origins of their own people -- but the truth is that they were once in the very same position as the Scarabai/Sectopods that they now hold under their thumbs. In the ancient days of their own home planet they were generally a peace-loving race, but when a stronger group invaded and forced them into bondage, they spent many generations in misery.

When they finally developed enough technology of their own to fight back, they did so with a devastating vengeance, wiping out not only the slavers but every other race on their planet. From there it was a downward spiral; while they grew more and more powerful, they also grew more savage. When they were forced out of their galaxy by an uprising, they fled in their ships but where forced into a strange galatic storm which took them out of their time and far across the universe and where forced to ditch on a planet -- Eaper.

This was when they turned into who they are today: the Corporation. They divided up power between them, choosing three different high ranking officials to rule the group at any given time, and while there’s a certain democracy among them it doesn’t extend to those who they kill or enslave. They have forgotten most of their history -- they’ve definitely forgotten their origins --and are even more ruthless as a group than they are as individuals. While they can’t leave the planet, their technology still far outstrips that of their captives, and throughout the years they’ve grown used to using brute force (when necessary) to keep the slaves in check. 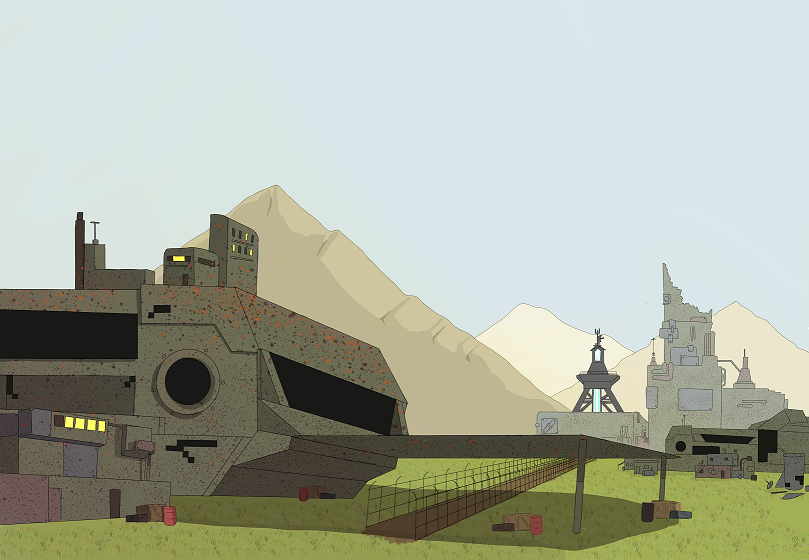 CEO: The CEO of the Corporation rose to his current position through careful, orchestrated maneuvering, not through violence or pure domination as one might expect. And while he has a mechanized arm and eye and is now constructed partially of machinery, he still relies more on cunning than on strength to get what he desires. When he lost his arm to one of the wild animals on Eaper, he decided to remake himself not only physically but in the eyes of his people: he shed his name, his history, and his persona and transformed himself into what he considered would be an ideal leader. It worked. Mostly removed from the everyday happenings of the Corporation, he works through the Vice President and Manager to reach his people and exert control. Hiding behind a screen of demure passivity, he rarely reveals who he truly is. He favors long-ranged weapons when he must use violence, and his mechanical arm and eye give him an uncannily good shot.

Vice President: The Vice President is younger than the CEO and less intelligent -- but still by no means stupid. He’s heavily built and bulky, with a thuggish sort of appearance, and uses the fact that people underestimate his intellect to his advantage. He also uses his position of power and connection to the CEO in this way, in part because they have a sort of formal father-son relationship that benefits them both. They know that they’re stronger united than they would be alone, and that this unification is necessary for continuing their domination over Eaper and even their own people. When he exerts force he can use most weapons with startling proficiency, and is much quicker than his appearance would lead one to believe. He has a dislike of the Management/Manager that he keeps mostly tamped down, but sometimes it boils over when the Management/Manager doesn’t make decisions quickly enough or bow to his authority.

Management: The Manager is the oldest of the Three, and oversees most of the day-to-day tasks of Corporate/the Corporation. Due to this, he is the one who his people are most familiar with, and he must curry favor with the population and his uppers alike. Gray-haired but with skin still mostly unlined, he is also the most heavily-mechanized out of the trio, and this was by choice. He elected to preserve himself with a robotic arm and torso before his agility and physical strength deserted him, and both of his aging eyes were removed with far keener ones put in their place. His weakness is his left arm; he planned long ago to have it replaced with a robotic one, but something crucial went wrong with the surgery and he was left with a mostly useless limb. However, he’s honed his abilities with his right arm as a result, determined not to be left lacking. 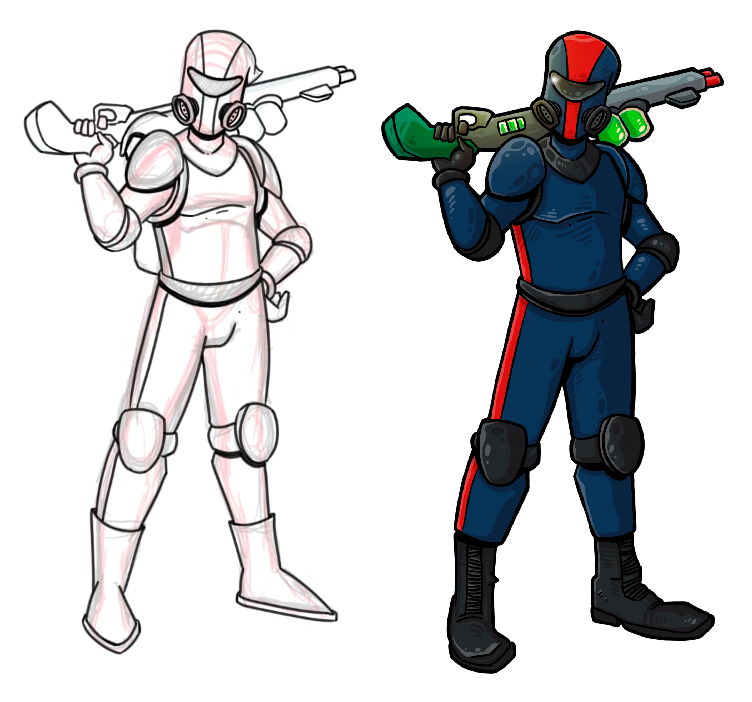 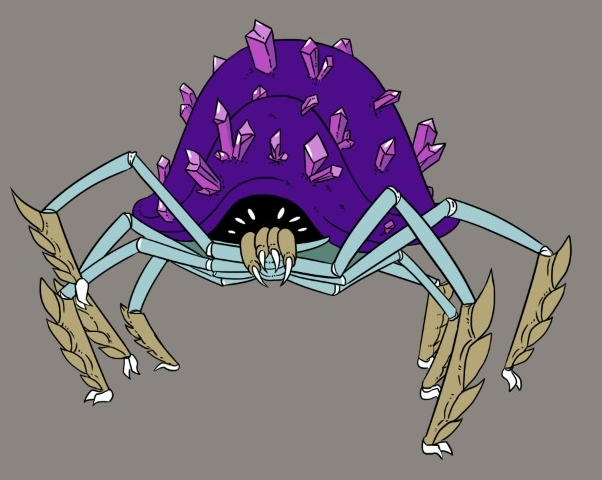 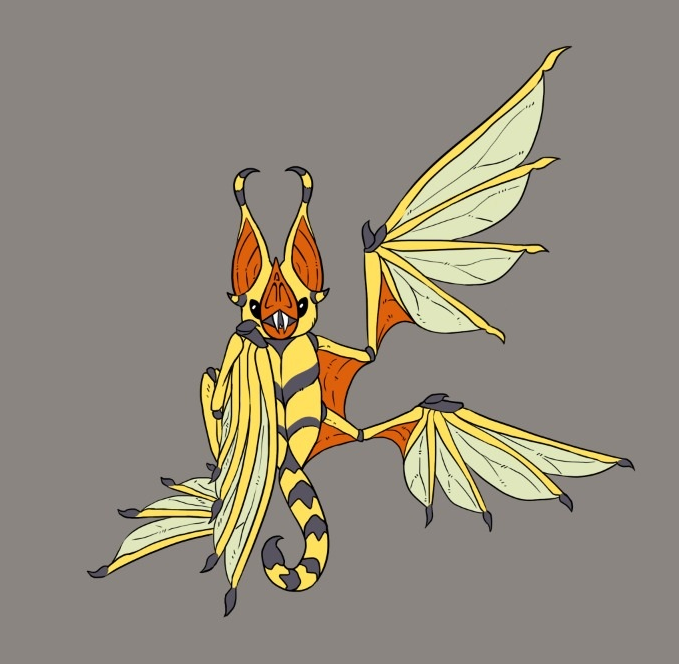 In order to download this game you must purchase it at or above the minimum price of £7.49 GBP. You will get access to the following files: 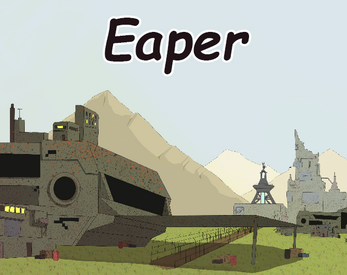